Exploration work to date at the Logrosán Project has delineated at least eight specific targets which warrant further investigation. With broad mineralised targets qualified at near surface depths by geochemistry, geophysics, trenching and rotary air blast (RAB) drilling, the 2018/19 winter drilling programme comprised 12 diamond drill holes for a total 2,283m drilled (the “Reconnaissance Drill Programme”), with the objective of determining the potential extent and tenor of mineralisation at depth. An initial four targets were selected for the Reconnaissance Drill Programme (two gold targets, one tungsten and gold target and one tungsten target).

“We are excited to report the results of this short confirmatory drill programme designed to support a decision on further work at the Logrosán tungsten and gold project.

The confirmatory programme has been conducted in a cost-effective manner, utilising spare drill rig capacity and with direct staffing by our JV partner, MEN Finland.

We consider that the findings have added significantly to the value of the project with five high grade tungsten intersections averaging 3m @ 0.3% WO3, plus associated tin credits, confirmed at depth.

As a comparison, commercial tungsten deposits typically grade from 0.1% WO3. Logrosán is only 40km from W Resources’ La Parrilla tungsten mine (49Mt @ 0.10% WO3) and mill which is currently under development.

We are currently considering the next steps for the project with our JV partners and will provide further updates in due course.”

The objective of the Reconnaissance Drill Programme (Figure 1) has been to show mineralisation continues to depth at four of eight specific target areas ahead of deciding next steps for the Logrosán Project. 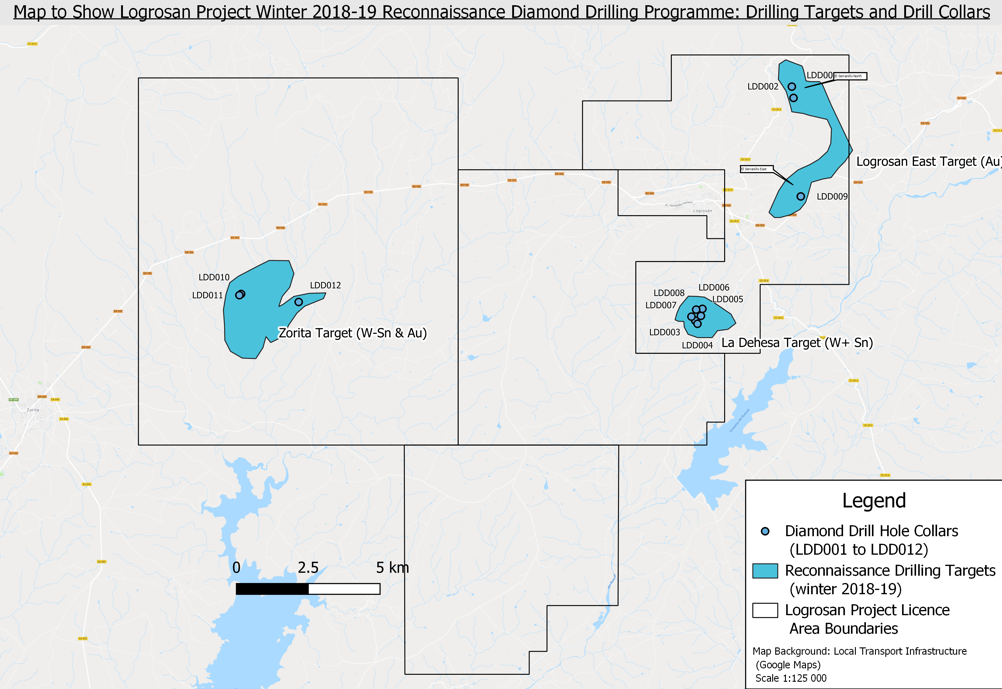 The four broad targets, selected on the basis of existing work permits, are:

In the El Serranillo North target area a total of 22 chip samples have confirmed anomalous gold background over an area of 0.3km2 ranging up to a maximum of 4.45g/t Au. Two deep holes (LDD001 & LDD002) targeted the southern limb of this anomaly with a single 1m intersection above 1g/t Au, but with four separate 3m-4m wide zones averaging 0.06g/t Au that could possibly vector to higher mineralisation in the vicinity.

On a regional scale the Logrosán East anomaly also marks the eastern most edge of a strontium (Sr) depletion front emanating from the San Cristobal intrusion. 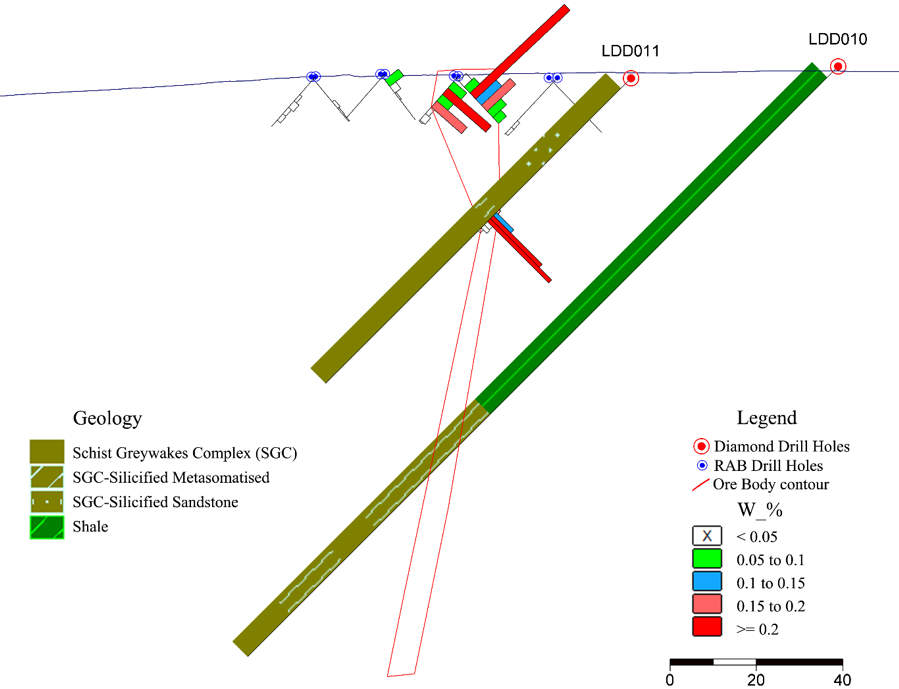 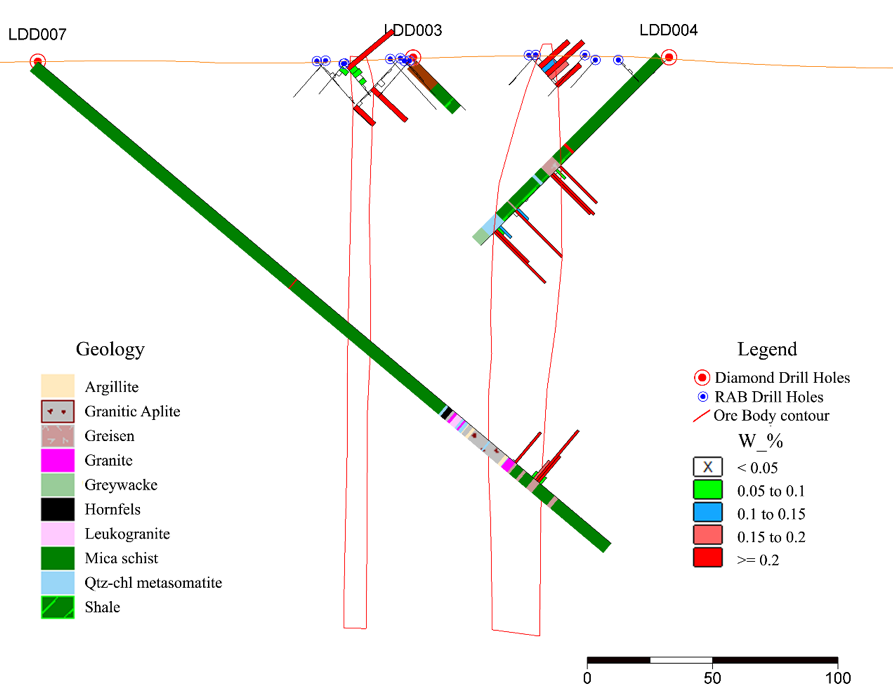 Figure 4: Conceptual model surface expression of the La Dehesa W-Sn deposit based on work to date 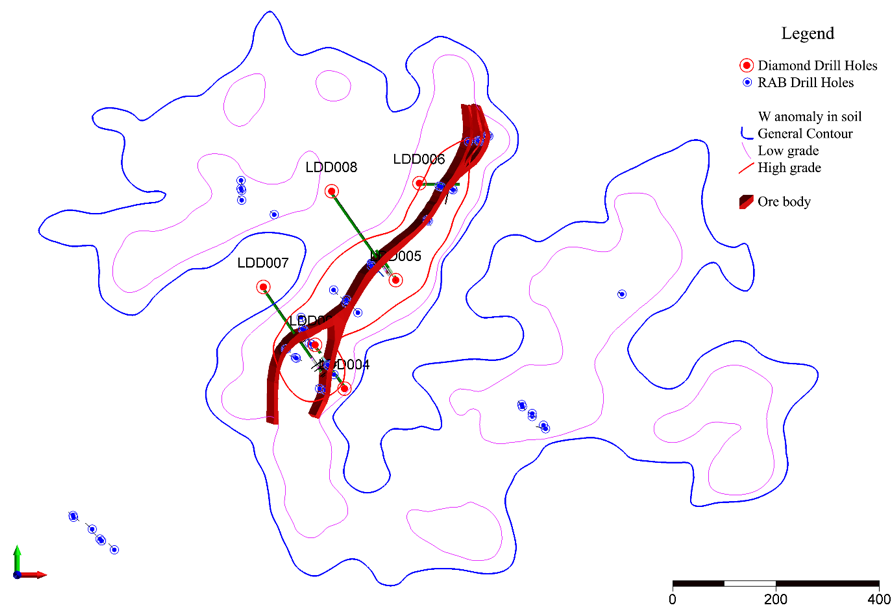 For further details of the target areas, please refer to Metal Tiger’s announcement of 27 June 2017.

The work programme consisted of 12 diamond drill holes for a total 2,283m drilled (see Table 1 and Figure 1).  Individual holes vary between 30m – 300m in depth, with an average 190m and between 40-50 degrees inclination.

The programme utilised a single Geomachine Oy GM-200 diamond core drilling rig, with a Finnish WL-56 size drilling bit to, produce a 39mm diameter core diameter.  Core was geologically logged and photographed in detail.  As this was a reconnaissance drilling programme, core sample intervals were submitted to accredited ALS Laboratory (ALS) in Seville as whole core.  Pulps from selected high grade samples were reanalysed and ALS ran their own internal QA/QC.

LML is the joint venture operating company for the Logrosán Project and Maria gold and antimony project (the “Maria Project”). It is held 50%/50% by Metal Tiger and JV partners MEN Finland. LML was incorporated in the UK on 13 March 2015.

During the 18 months prior to the joint venture commencing, Metal Tiger's joint venture partner MEN Finland, carried out more than 40,000 soil samples, hundreds of pan-concentrate samples, covered thousands of linear kilometres with ground magnetic survey and assessed electro-magnetic tomography.  The presence of tungsten mineralisation had been confirmed by soil sampling, outcrop sampling, trenching and historical drill holes.  Gold mineralisation had been indicated by pan-concentrate sampling which delineated three areas with anomalous gold.

Metal Tiger funded a total of €1 million in exploration work between 2015 and 2017 in line with an agreed exploration programme that included up to 5,000 metres of RAB drilling, to earn 50% of Logrosán Minerals Limited.

The Maria Project is approximately 15 kilometres north of the Logrosán Project licences. Soil geochemistry and the results from RAB drilling indicate that the project area has prospectivity for antimony-gold style mineralisation.

The Logrosán Project and Maria Project areas, are located in a geologically prospective, under-explored and mining friendly jurisdiction in west-central Spain within the province of Cáceres in the Extremadura autonomous region.  The projects are served by a well-developed and maintained road network, with good power, water and telecommunications infrastructure and enjoy the full support of the regional and local government and administration.

The technical information contained in this disclosure has been read and approved by Mr Nick O'Reilly (MSc, DIC, MAusIMM, FGS), who is a qualified geologist and acts as the Competent Person under the AIM Rules - Note for Mining and Oil & Gas Companies. Mr O'Reilly is a Principal consultant working for Mining Analyst Consulting Ltd which has been retained by Metal Tiger plc to provide technical support.

Metal Tiger’s Direct Projects division is focused on the development of its key project interests in Botswana, Spain and Thailand.  In Botswana, Metal Tiger, through its 10.48% interest in MOD Resources Limited and related JV, and its 50% interest in Kalahari Metals Limited, has a growing interest in the large and highly prospective Kalahari copper/silver belt.  In Spain, the Company has tungsten and gold interests in the highly mineralised Extremadura region.  In Thailand, Metal Tiger has interests in two potentially near-production stage lead/zinc/silver mines as well as licences, applications and critical historical data covering antimony, copper, gold, lead, zinc and silver opportunities.