The results indicate compelling new targets for follow-up in both Kitlanya West (“KIT-W”) and Kitlanya East (“KIT-E”) (together the “Kitlanya Project”), as well as expanding on drill targets identified in KML’s Ngami Copper Project (“NCP”).

The Company is pleased to confirm that the recent work completed on the Kitlanya Project satisfies the first earn-in option for KML to acquire 25% of the Kitlanya Project from Resource Exploration and Development Limited (“RED”), as detailed in the Company’s announcement of 30 November 2018. 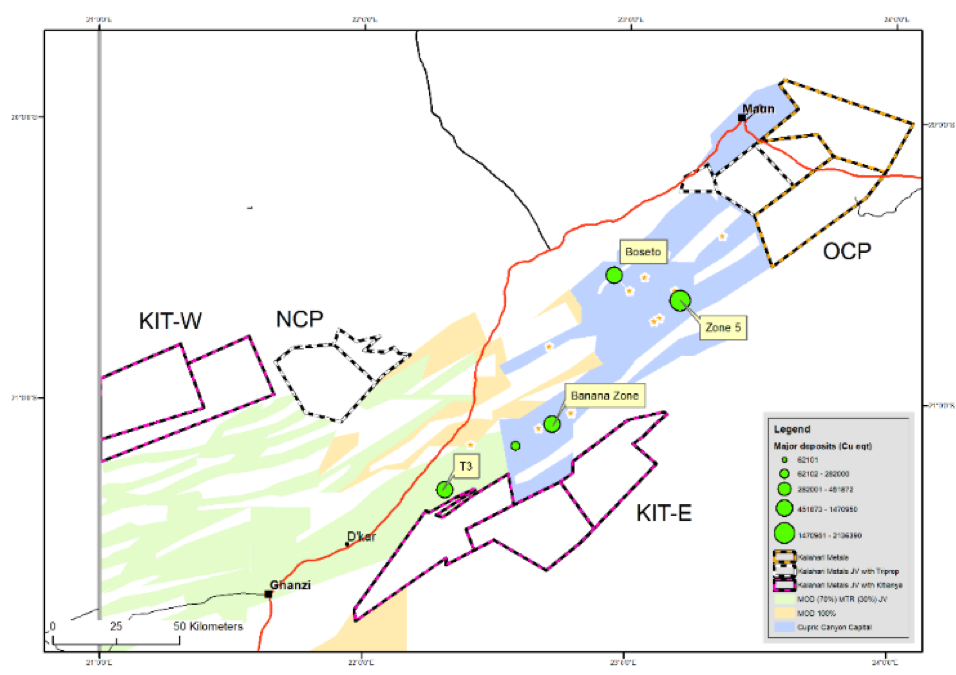 “The results from recently completed soil sampling and re-interpretation of historical data over the Kitlanya Project has provided compelling targets for drill testing.

We are actively reviewing KML’s proposed diamond and reverse circulation drilling targets as they relate to this additional interpretation and hope to be able to drill targets at NCP in the near future as well as define drill targets at Kitlanya West and Kitlanya East. We look forward to keeping shareholders updated in this regard.”

KIT-E is notable for its thin Kalahari Group cover and proximity to a number of known deposits (including MOD’s T3 deposit) and copper-silver occurrences.  Re-interpretation of magnetic data has highlighted five prospective areas for follow-up.  Of particular interest are target areas (1) and (3) (Figure 2) which have been interpreted as anticlinal structures as opposed to synclines in historical work.  These targets could therefore present a priority setting for mineralisation hosted in hinge-zones. 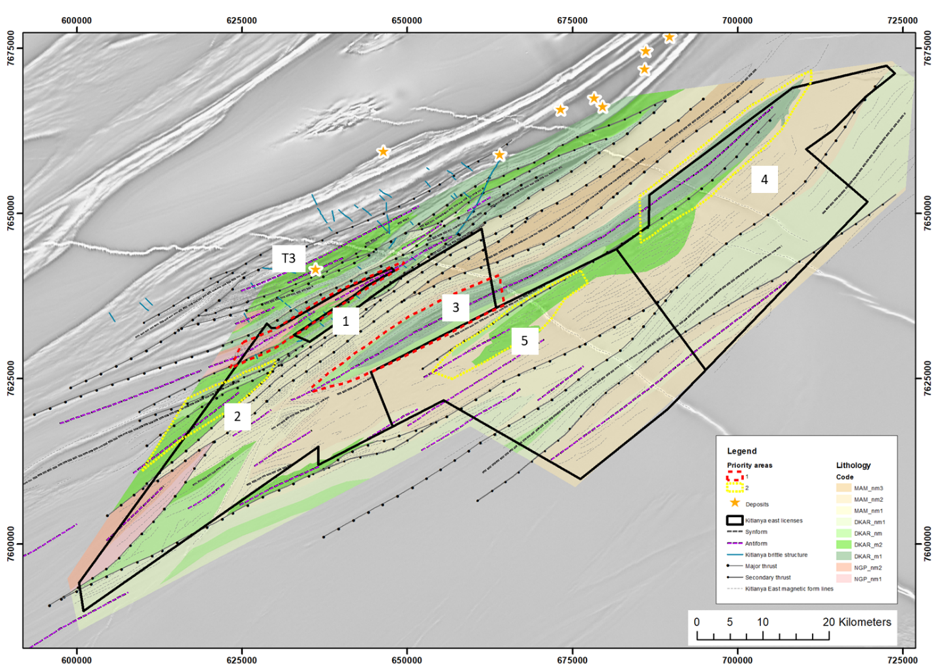 A distinct copper anomaly is associated with the northern target (1) in historical TerraleachTM sample datasets (Figure 3).  Historical drilling into this target appears to have intersected and stopped in the D’Kar Formation with distinct evidence for outward younging direction (carbonate/siltstone dominated fold centre grading to sandstone dominated limbs) with pyrite and occasional chalcopyrite noted in the central part of the fold target.  These results provide significant support for the magnetic interpretation with the lower D’Kar Formation (or Ngwako Pan Formation) expected in the fold-hinge rather than on the limbs as previously assumed.

A total of 3,410 soil samples were recently collected along traverses over priority areas (Figure 3 and 4).  Samples were screened to -180µm and analysed using portable XRF.  In addition, Airborne Electromagnetic (“AEM”) traverses were flown using New Resolutions Geophysics’s XCiteTM system along selected traverses to test the effectiveness of AEM in the current environment.

Despite relatively low absolute concentrations, soil sample results delineate a zone of anomalous zinc over the northern target (1), in addition to a more discrete zinc and copper anomaly in the central part of target (3).  The generally low soil sample metal concentrations are more reflective of targets where the mineralised D’Kar-Ngwako Formation contact is not exposed to the Kalahari palaeotopography with the exploration focus thus in fold hinges with thin D’Kar Formation covering the contact.  Drill chips from a recent water borehole indicate the lower D’Kar Formation in central part of the northern target (1) further supporting the magnetic interpretation.  AEM orientation traverses clearly map the thin Kalahari Group conductive cover as well as distinct lithological boundaries and conductors supporting the application of the method. 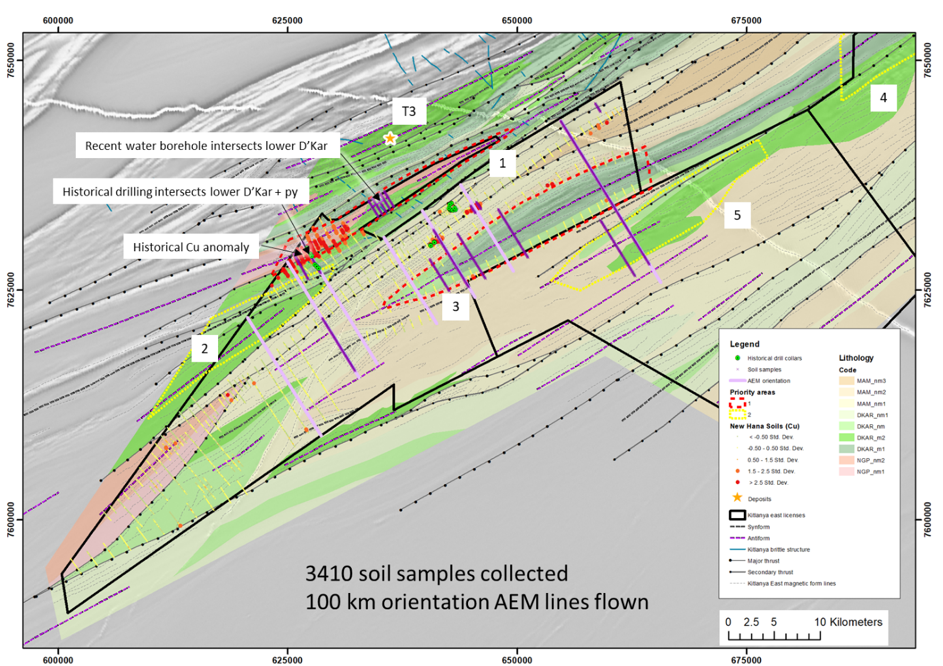 The Metal Tiger Board believes that the current phase of work over KIT-E has added significant value in upgrading target areas for follow-up and that the thin Kalahari Group cover and proximity to MOD’s T3 deposit, provide further support for focussed follow-up exploration on these licences. 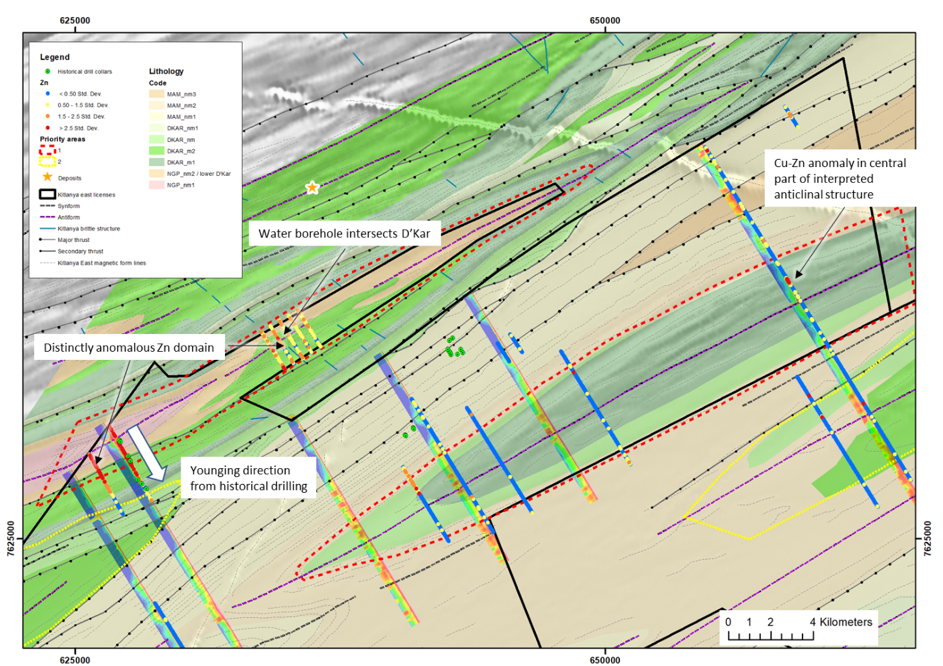 The KIT-W project is situated adjacent to KML’s NCP project and has similar potential for both ‘dome’ related and anticline limb mineralisation along D’Kar-Ngwako Pan Formation contacts.  Importantly the project is located in proximity to the basin margin with basement subcropping in the northwestern part of the licence.  Re-interpretation of government magnetic data favours the existence of Kgwebe basement volcanics in the core of anticlines and along the basement margin.  Presence of Kgwebe Formation (Figure 5) is often considered important for area prioritisation in the Kalahari Copperbelt.

Historical 400 metre line spaced GeoTEM fixed-wing AEM data was collected over the eastern half of the KIT-W project in the mid-1990s.  The data has been re-processed and run through a layered earth routine (Figure 6) to highlight structure and targets.  Three discrete conductive ‘dome’ targets have been delineated.  Importantly, these are situated in interpreted fold closures and hinge zones based on magnetic data.  Given the favourable regional setting, proximity to drill tested copper-silver mineralisation on the NCP project and compelling AEM signature, these targets are considered ready for stratigraphic drill testing. 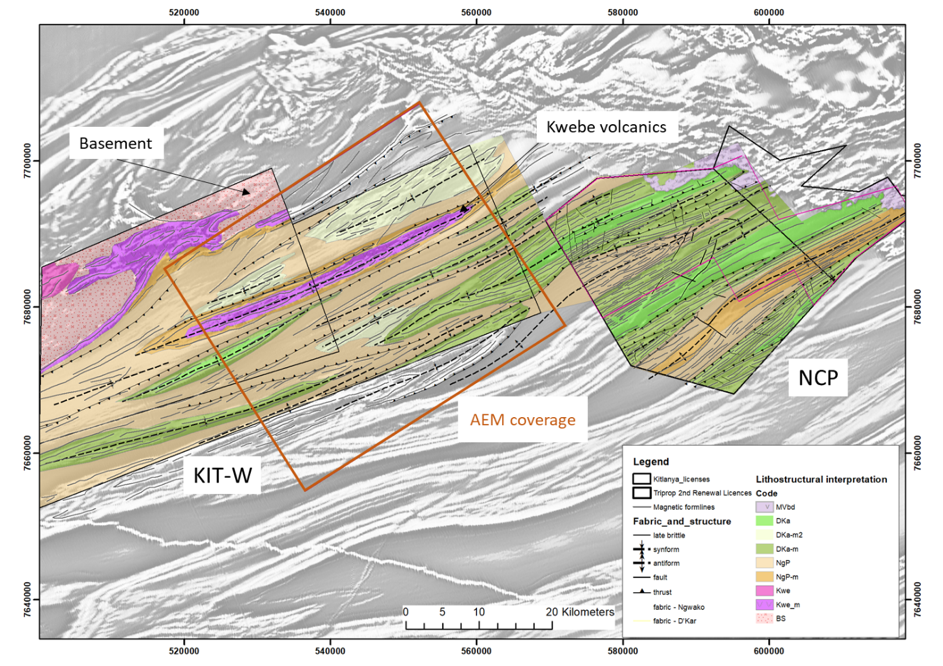 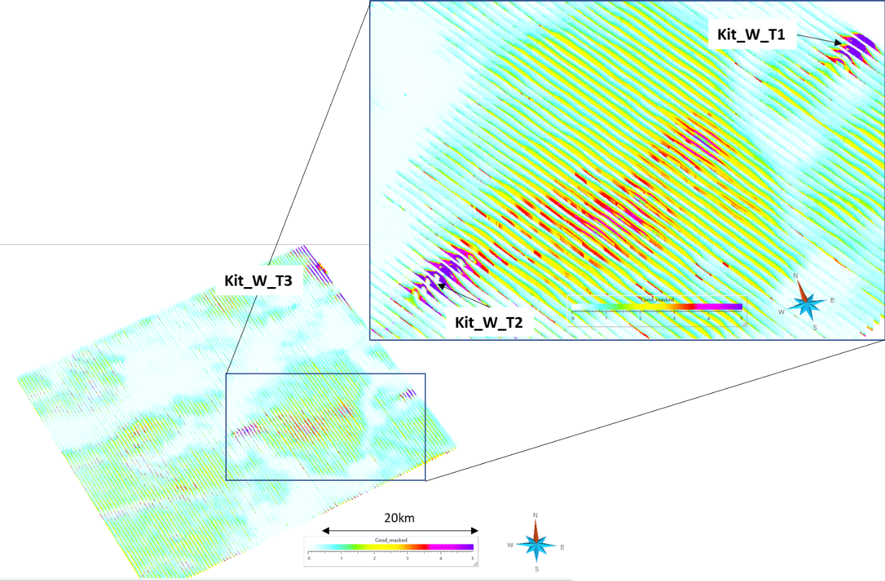 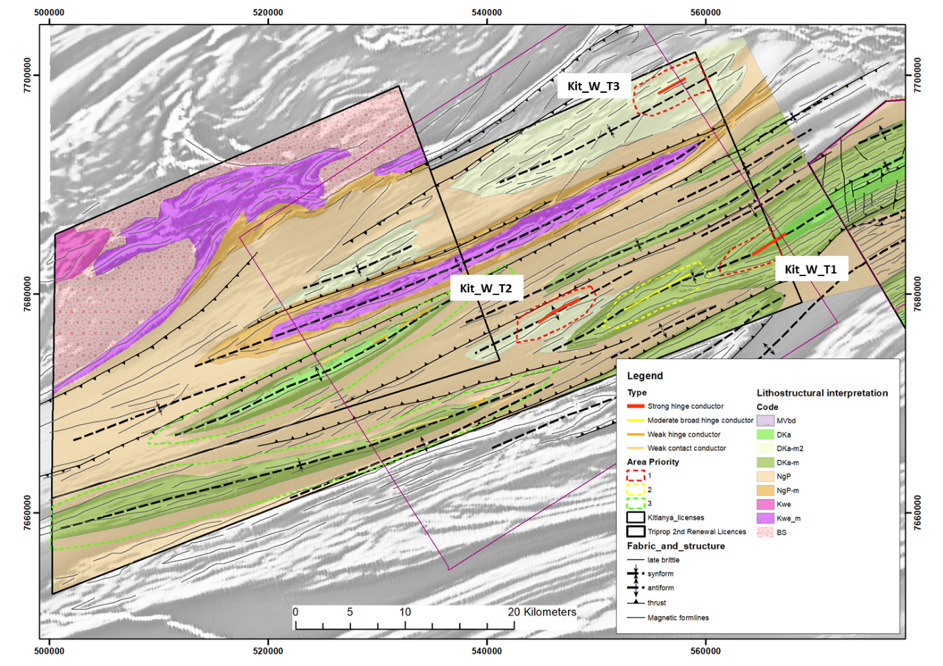 A total of 1,432 historical soil samples were sent for re-assay, using low-concentration partial digest TerraleachTM analysis, as part of an orientation exercise.  The objective of the study was to determine if partial leach techniques could offer an improvement on conventional geochemistry in areas with thicker Kalahari Group cover.  Results from the study produced excellent results with discrete copper anomalies associated with drill tested mineralisation and a broader lead-zinc halo in overlying D’Kar Formation.  Importantly, sample coverage included one of the priority anticline hinge targets identified in the recently completed AEM data (Figure 8).  In this area distinct copper anomalies are apparent with a more dispersed lead-zinc anomaly along fold plunge.  The results support conceptual models for this target, thereby providing further motivation for drill testing. 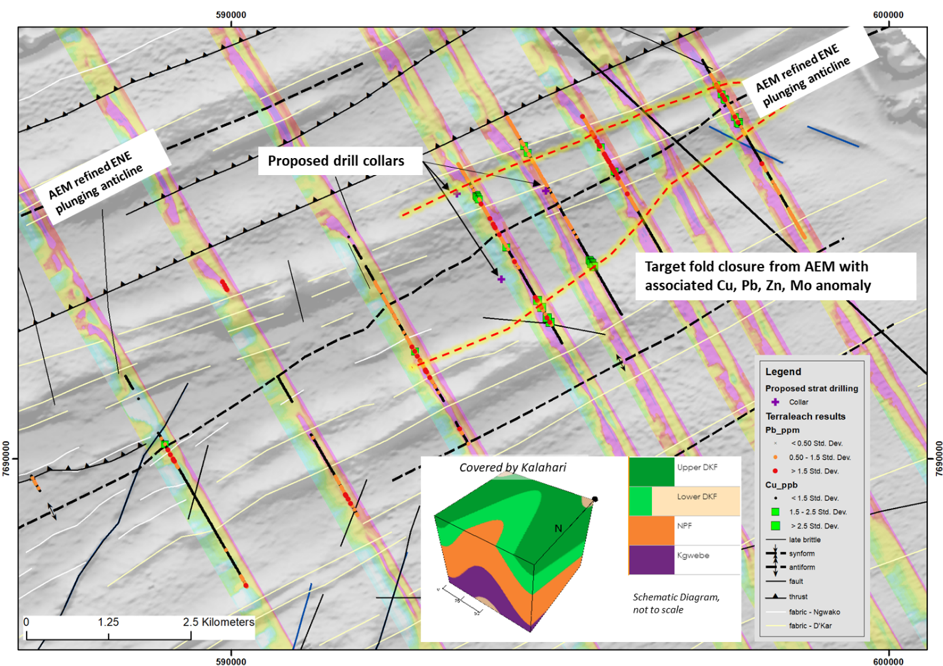 Under an investment agreement announced on 6 June 2018, Metal Tiger currently has a 34% interest in KML and has the right to acquire up to 50% of KML for a further consideration of US$0.5 million, providing Metal Tiger with further exposure to a largely unexplored area, adjacent to significant recent discoveries in the highly prospective Kalahari Copper Belt.

The technical information contained in this disclosure has been read and approved by Mr Nick O’Reilly (MSc, DIC, MAusIMM, FGS), who is a qualified geologist and acts as the Competent Person under the AIM Rules - Note for Mining and Oil & Gas Companies.  Mr O’Reilly is a Principal consultant working for Mining Analyst Consulting Ltd which has been retained by Metal Tiger PLC to provide technical support.

Metal Tiger’s Direct Projects division is focused on the development of its key project interests in Botswana, Spain and Thailand.  In Botswana, Metal Tiger, through its 10.5% interest in MOD Resources Limited and related JV, has a growing interest in the large and highly prospective Kalahari copper/silver belt.  In Spain, the Company has tungsten and gold interests in the highly mineralised Extremadura region.  In Thailand, Metal Tiger has interests in two potentially near-production stage lead/zinc/silver mines as well as licences, applications and critical historical data covering antimony, copper, gold, lead, zinc and silver opportunities.